Newtown High School in Elmhurst, New York is nestled among densely packed private houses. This palatial structure has stood for over one hundred years on 48th Avenue and 90th Street, the central point of the community. Solid, dignified and regal, the school looks as if it had been here always and will last forever.

At one time, its very existence was challenged and even before that, it was one man’s dream. His name was Dr. James Darius Dillingham. It was his dream, his alone, that a palatial structure would dominate the suburban, rural landscape of Newtown. His dream was an academic high school in a farming town.

Dr. Dillingham was raised on a farm in Massachusetts, educated as a lawyer, and ultimately decided to become an educator. He came to Queens when he was twenty-nine years old in 1894 to be the principal of the Corona school.

The school consisted of a small wooden building that housed every grade in the town. From the start, Dr. Dillingham wanted the school to grow and so in 1897, he got the local school board to allocate $75,000 to the construction of a new building that would tower over any existing structure in the area. It took three years to be completed. In June of 1900, Newtown held a graduation for one student, William Boyce. Because Dr. Dillingham had not forgotten his childhood, Newtown was the first academic school to offer courses in agriculture. The new curriculum boasted new science laboratories, a large foreign language department, and college preparatory math. He also enlisted known scholars, such as Professor George Kingsbury, to the staff. In 1910, Newtown dropped all lower grades and became solely a high school with 747 students. That year, Newtown graduated 14 students.

In the same year, 1910, the city ordered Dr. Dillingham to close the school. “It was too small,” they said, “and by the way, Elmhurst didn’t even need a high school”. If Newtown was too small, Dr. Dillingham would solve the problem. He badgered the board for more money for expansion of the school. Each year, the board asked him to close the school and each year, he got a one-year extension. 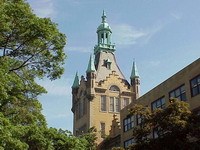 In 1920, the board allocated $900,000 for an addition to the school. It would hold a large auditorium and have an inspiring tower. When the new addition opened, the large auditorium was dedicated in the name of the standing principal and would be called Dillingham Hall. Dr. Dillingham had the pleasure of walking into an auditorium with his own name on it for fifteen more years as principal. By then, Newtown would have 2 more additions, an athletic field and 8,500 students.
There were no deans or security officers in those days. When a student misbehaved or got into trouble, Dr. Dillingham would walk him home personally and talk to the student’s parents. It was low-tech but effective.