School History » History of the Building

History of the Building 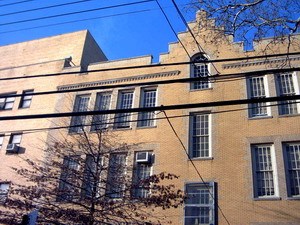 Newtown High School was built 1920-1921 by Architect C.B.J. Snyder; its additions were constructed by Architect Walter C. Martin in 1930-1931 and Architects Maurice Salo & Associates in 1956-58.
“In 1917-18, Architect C.B.J. Snyder, the noted superintendent of School Buildings for the Board of Education, designed an impressive Flemish Renaissance Revival style addition to the school, which featured stepped gables and a dramatic 169-foot, centrally-placed tower topped by a cupola and turrets. The start of construction was delayed until 1920 by the First World War, …The new wing opened in September 1921.” Landmarks Preservation Commission, June 24, 2003